Archive for the Futsal Category 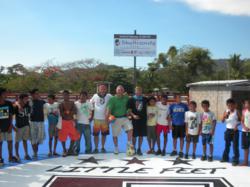 In May, 2011, the Little Feet Foundation, in partnership with Skullcandy®, completed the installation of a multi-patent SnapSports outdoor Futsal court, in Huacas, (Tamarindo) in Northern Costa Rica, for the children of the villages surrounding the area. SnapSports® Futsal surfaces are the official flooring for United States Futsal Federation (USFF), the governing body for the sport of Futsal in the U.S.A.

The Little Feet Foundation, founded by Trevor Slavick, was created with one big goal in mind; sending soccer balls to underprivileged children around the world. Trevor conceptualized the idea for Little Feet, while working as an airline pilot and playing soccer with children in the more impoverished areas of Central and South America. Working in partnership with, Skullcandy®, a Park City, UT based company, known for it’s generous humanitarian efforts around the world, the team at Little Feet have been able to give the gift of soccer to the less fortunate children in the area of Northern Costa Rica, with the installation of a SnapSports® Futsal Court.

“We are happy to partner with a great company like Skullcandy, and a world class foundation such as Little Feet, to provide a high-quality SnapSports Futsal pitch to the children of these impoverished Costa Rican Villages, giving them the opportunity to participate in a sport they love, it’s very rewarding for us all here at SnapSports” Jorgen Moller, CEO, SnapSports, Inc. 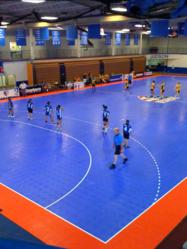 SnapSports®, the industry leading manufacturer of athletic surfacing, will be supplying a SnapSports® multi-patented Futsal pitch, for Scout-O-Rama 2011, being held at the South Towne Expo Center, in Sandy, UT on April 30, 2011. The SnapSports® Futsal soccer court will be used as an interactive showcase, to garner more youth involvement in the game of Futsal, and also to give kids the opportunity to learn more about scouting.

Utah’s 2011 Scout-O-Rama, hosted by the Great Salt Lake Council, Boys Scouts of America, will not only be an opportunity for the scouts to showcase their skills, but also will highlight the kick off of their focus on ‘A New Century of Scouting Service’, by which the scouts put an emphasis on completing 2011 hours of service and encourage all attendees to participate as well, by bringing a canned food item to be donated to the Utah Food Bank or a children’s book to be donated to Read Today.

The annual Scout-O-Rama event is expected to bring 25,000-30,000 attendees of all ages and give them the opportunity to participate in fun and exciting “hands-on” exhibits, including an interactive clinic with two indoor soccer leagues that will be playing games on the SnapSports® Futsal court.

SnapSports® multi-patented sports surfacing, is specifically designed to endure high-performance play by athletes of all ages and ability. Incorporating a multi-patent shock-absorption technology, SnapSports® athletic surfacing, eases the impact on joints, allowing athletes to play safer and longer. As the official flooring of the United States Futsal Federation (USFF), SnapSports®, is delighted to partner with an outstanding organization like the Great Salt Lake Council, Boys Scouts of America, to help promote youth involvement in the sport, and within the scout’s organization.

“Having this event right in our backyard is fantastic, everyone here at SnapSports is looking forward to seeing an exciting weekend of fun family oriented sports competition take place on our floors. ”- Jorgen Moller, CEO, SnapSports, Inc.

The Scouts Organization hopes that by incorporating the sport of Futsal they can encourage more Hispanic youth to become involved in scouting as well. Also expected to join in Saturday’s activities is Leo the Lion, ReAL Salt Lake Mascot, who will stop by and help the kids do some goal shooting on the SnapSports® Futsal court later that afternoon. The Great Salt Lake Council has also announced Jerry Sloan, as the 2011 Scout-O-Rama Honorary Chairman.

“It’s these kinds of partnerships that are what scouting is all about.”- Reid Hall, Boy Scouts of America, Great Salt Lake Council.

Posted in Futsal, Uncategorized | No Comments »

SnapSports, the world’s leading manufacturer and provider of outdoor multi-courts and sports surfacing, continues their association with the United States Futsal Federation as the exclusive and official flooring of the USFF. The agreement was signed at the FUTSAL national championships this year where SnapSports provided over 100,000 square feet of athletic surfacing.

“We are proud to have been chosen as the only approved surface worthy of Futsal competition by the USFF,” says Jorgen Moller – CEO of SnapSports.

Futsal players from around the world will continue to compete on surfaces, specially designed by SnapSports, which will protect them from injury while providing the speed and response the game requires.

Futsal is a five-a-side version of soccer which is played on basketball-sized pitches. The sport traces its roots to the 1930s and is today played worldwide. Futsal is currently experiencing explosive growth in the US. The US Youth Soccer Association (USYSA) and US Futsal signed an agreement in August of 1995 to promote Futsal in all National State Associations as their game of choice for indoor soccer. Many American soccer coaches use Futsal to train athletes, especially in the off-season.

Asked why they switched from their previous modular surface provider, Alex Para, CEO of the US Futsal Federation, said “We wanted to work with SnapSports because of the quality of their designs and because their floors are easy to install. Futsal demands a lot and SnapSports provides it, plain and simple.”

100,000 square feet of SnapSports® Indoor BounceBack® ShockTower® flooring will be featured for the Southwest and Northeast FUTSAL® Regional Championships.

Salt Lake City, UT (PRWEB) February 11, 2010– Over two hundred teams will compete in the Southwest and Northeast Regional Futsal (http://www.futsal.com) tournaments being held this weekend. SnapSports is the exclusive official sports flooring provider for the United States Futsal Federation. SnapSports representatives will be in both locations to install more than 16 official indoor courts in Los Angeles, California and York, Pennsylvania. The courts vary in size from 54’x90′ to 90’x130′.

“We are stoked to provide our top of the line Indoor BounceBack ShockTower surfaces for the regional & national championships this year. Our relationship with the USFF has grown into a great partnership over the past two years and we don’t see things slowing down any time soon,” said Dan Wollman of SnapSports.

Each tournament will feature top athletes from several states and crowds are expected to number in the tens of thousands.

The USSF is the national governing body for Futsal in the USA. Futsal is the only form of indoor soccer approved by the Federation Internationale De Football Association (FIFA). An estimated 12 million players from 100 countries and all continents play Futsal.

Futsal is a five-a-side version of soccer for competition and played on basketball-sized courts, both indoors and out without the use of sidewalls. This exciting and fast paced sport traces back to 1930’s and today is played worldwide at every level. The U.S. Youth Soccer Association (USYSA) and U.S. Futsal signed an agreement in August of 1995 and in 1999, to promote futsal in all their National State Association as their game of choice for indoor soccer under the auspices of U.S. Futsal.

SnapSports athletic surfaces, provide unmatched perform ace while also giving the athletes an added level or protection from injury on impact. " Our multi-patent sports surfacing is the ideal choice for such a fast action sport. We took our 30 years of manufacturing & experieince and put it into the sports surface Futsal player will be competing on. We are very happy to be a part of such a great sports organization." Said Jorgen Moller, CEO SnapSports LLC. Moller went on to say " We are working with numerous other organizations worldwide who are planning on upgrading to SnapSports as soon as possible, these are very exciting times for everyone in our company".

About SnapSports:
Located in Salt Lake CIty, Utah -SnapSports manufactures 24 hours a day, 7 days a week, 365 days a year in their 100,000 sq.ft state of the art facility. The family at SnapSports is proud of their more than 30 years experience in the Outdoor Courts and Sports Flooring Industry, which has made them the fastest growing company in the industry. For more information Please visit their website at http://www.snapsports.com or call 800-457-0174

Posted in Futsal, News | No Comments »