Archive for the Team Handball Category 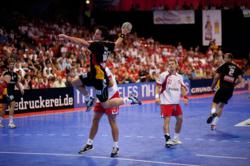 SnapSports® Athletic Surfaces is the official flooring of the 2013 USA Team Handball Club National Championships, to be held May 17-19 at the Reno-Spark Convention Center in Reno, Nevada. SnapSports multi-patented sports surfacing is the preferred tournament surfacing of USA Team Handball and the top performing sports flooring in the industry.

The USATH 2013 Club National Championship is the largest annual Handball competition in the country. Teams from across the nation will diverge on Reno to participate in this championship tournament during the course of which, the best among them will be decided. The athletes will play at the Reno-Sparks Convention Center on over 30K square feet of SnapSports multi-patented Revolution ShockTower® surfacing.

“Our Partnership with SnapSports has allowed USATH to grow both in popularity and organizationally. We have had the opportunity to work with other modular floor companies, but we chose SnapSports… their products have outperformed our expectations and we prefer their surfacing over others in the industry.”
~ Jeffrey Utz – President – USATH. USA Team Handball

“SnapSports enjoys the continued opportunity to be the Official Surfacing Partner of USA Team Handball. Our multi-patented products provide the traction and control that are crucial elements in the sport of Handball. SnapSports surfacing ensures player safety and keeps athletes performing at their peak.”
~ Jorgen Moller – CEO, SnapSports Inc. 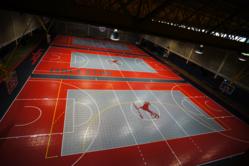 SnapSports®, the world’s leading manufacturer and supplier of premium modular sport surfaces, and official flooring of USA Team Handball, has been officially recognized and approved by the International Handball Federation. The administrative and controlling body for International Team Handball has certified SnapSports surfacing as meeting international and IHF standards.

Handball, a team sport formed at the end of the 19th century, pits two teams of seven players against each other, with the purpose of scoring in the opposing team’s goal. Handball games are played primarily in indoor sport facilities, on indoor sport surfacing. Formed in 1946, the International Handball Federation has been the organizing body of Championship Handball play since the end of World War II. The IHF is composed of approximately 795,000 teams and 19 million players worldwide.

“We’re excited to be recognized by the IHF, the world governing body for team handball, as a supplier of quality sports flooring. This new approval will greatly impact our sales and marketing efforts in the many markets outside the U.S. and is a strong complement to our long standing endorsement as the official playing surface of USA Team Handball.” – Robert Dougherty, SnapSports. SnapSports multi-patented Indoor BounceBack Shocktower® surfacing is engineered to accommodate aggressive play, provide unmatched traction and durability, and meet the unique demands of the sport of Handball. SnapSports exclusive ShockTower® Technology ensures a consistent playing surface; excellent coefficient of friction designed to keep the surface in place, and is guaranteed to reduce the impact on athletes’ joints and limbs by being engineered specifically with performance and safety in mind. 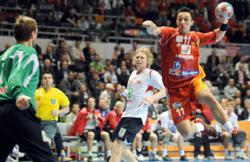 SnapSports®, the industry leader in modular sports surfacing, will be the official floor of the 43rd USA Team Handball National Championships, to be held May 13-15, 2011, at the Salt Palace Convention Center, in Salt Lake City, UT.

SnapSports® Athletic Surfacing, the industry leader of the modular sports surfacing industry, will provide the official flooring for the 43rd USA Team Handball National Championships, being held May 13-15, 2011 at the Salt Palace Convention Center, in Salt Lake City, UT. The three-day tournament, will feature competition in three different divisions, for which all of the games, will take place on SnapSports®, patented BounceBack® surfacing, manufactured specifically for durability during competitive play. By the end of the event, two teams will walk away as the 2012 Men’s and Women’s Championships.

The 43rd USA Team Handball National Championships, notably the biggest weekend in American Handball, will be held for the first time in Utah, and has been welcomed with open arms by the Utah Sports Commission.

“We are excited to host this event for the first time,” said Jeff Robbins, CEO of the Utah Sports Commission, “Utah’s already diverse portfolio of sporting events continues to grow each year, and this Olympic sport particularly helps to build our Olympic legacy”

All of the games at this National event will be played on SnapSports® multi-patented sports surfacing. SnapSports® Athletic Surfacing, is the industry leading manufacturer of high-performance modular sports surfaces. SnapSports® patented BounceBack® surfaces, are designed specifically to accommodate aggressive play using patented Shocktower® technology, which provides superior shock absorption, and eases the impact on joints, creating a safer playing surface for athletes.

“We are delighted to continue our partnership as the official flooring of USA Team Handball. Our multi-patented surfaces, combine patented shock absorption technology with traction and control features, to meet the unique demands of the sport, which is why for handball, no other surface comes close.” Jorgen Moller, CEO, SnapSports®, Inc.

Utah will become the 17th state to host the Nationals event, which was originally held in 1968 in Long Island. The selection of Salt Lake City as the host city, was not surprising, as USA Team Handball’s national governing body, recently moved and established it’s headquarters in Utah’s capitol city in 2005.

SnapSports® Athletic Surfacing Is Chosen As The Championship Court For The Big Apple World All-Stars Tournament on January 1-2, 2011

HANDBALL, widely known as Team Handball in the United States, is played in 159 nations by 39 million people. Many people link elements of basketball, soccer and lacrosse to the sport. It is fast, physical and exciting. Competition consists of two teams, composed of six players and one goalie each, facing off on a court approximately 66 by 131 feet. Players dribble, pass and shoot a ball into a goal. It is a very fast, exciting and aggressive player-on-player contact sport, and the SnapSports® Bounceback surface is designed to absorb player impact during aggressive play.

“We are excited to have SnapSports® surfacing at the 2011 Big Apple Tourmament and All Star Event with the best team handball floor the US has to offer the Sport. All of our teams and professional players really enjoyed playing on SnapSports at our 2010 inaugural event.”
Shkumbin Mustafa, President, New York City Team Handball Club and Big Apple Tournament/All Star Event Director

The tournament will showcase World All-Stars Vs. German All-Stars with some of the greatest names in Handball, such as Jackson Richardson, HANS Wislander and MIRZA DZOMBA to name a few. This is an event not to be missed.

“We are really excited to have our SnapSports® athletic surfaces chosen above all others as the official flooring of USA Team Handball and to be part of such a world-class event.” Said Jorgen Moller – SnapSports.

The tournament will be televised live on EUROSPORT TV in over 50 countries.