SnapSports® Athletic Surfacing Is Chosen As The Championship Court For The Big Apple World All-Stars Tournament on January 1-2, 2011 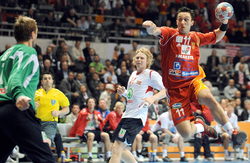 HANDBALL, widely known as Team Handball in the United States, is played in 159 nations by 39 million people. Many people link elements of basketball, soccer and lacrosse to the sport. It is fast, physical and exciting. Competition consists of two teams, composed of six players and one goalie each, facing off on a court approximately 66 by 131 feet. Players dribble, pass and shoot a ball into a goal. It is a very fast, exciting and aggressive player-on-player contact sport, and the SnapSports® Bounceback surface is designed to absorb player impact during aggressive play.

“We are excited to have SnapSports® surfacing at the 2011 Big Apple Tourmament and All Star Event with the best team handball floor the US has to offer the Sport. All of our teams and professional players really enjoyed playing on SnapSports at our 2010 inaugural event.”
Shkumbin Mustafa, President, New York City Team Handball Club and Big Apple Tournament/All Star Event Director

The tournament will showcase World All-Stars Vs. German All-Stars with some of the greatest names in Handball, such as Jackson Richardson, HANS Wislander and MIRZA DZOMBA to name a few. This is an event not to be missed.

“We are really excited to have our SnapSports® athletic surfaces chosen above all others as the official flooring of USA Team Handball and to be part of such a world-class event.” Said Jorgen Moller – SnapSports.

The tournament will be televised live on EUROSPORT TV in over 50 countries.