The 50th anniversary of the NBA’s Atlanta Hawks commemorated with donation of SnapSports outdoor basketball court on January 21, 2019

As part of the organization’s commitment to community in 2015, the Atlanta Hawks Foundation pledged to build and revamp 25 metro Atlanta basketball courts by 2020. Making good on that 5 year promise, the Hawks installed the 23rd of 25 courts Monday at Selena S. Butler Park, adjacent to the Martin Luther King, Jr. Recreation and Aquatic Center. The court, comprised entirely of SnapSports NEW Outdoor Revolution® surfacing, was the first court to feature a custom gold and black design celebrating the 50th Anniversary of the Atlanta Hawks. The color scheme notably also pays tribute to Dr. Martin Luther King, Jr, honoring his national and local contributions. SnapSports, based in Utah, was ecstatic to have their product chosen for such an incredible event.

“We are proud to partner with the Atlanta Hawks Foundation on a joint mission to increase youth play, leadership skills and delivering a positive impact in local communities. The team at SnapSports is honored to have our SnapSports® Outdoor Basketball Courts chosen for these community courts,” – Jorgen Moller, CEO SnapSports

The 58′ x 102′ SnapSports Outdoor Revolution Court done in alloy, black and gold showcases a custom painted 20′ x 20′ center court logo commemorating the Hawks 50 year anniversary. The Hawks chose SnapSports Outdoor Revolution, the newest court product in the SnapSports family, for its seamless design, durability, and excellent performance metrics: including industry leading wet/dry traction and superior ball play suitable for players of all ages. The Atlanta Hawks will finish their project commitment, installing 12,000 square feet of SnapSports surfacing for courts number 24 and 25 in the summer of 2019.

The Atlanta Hawks organization, founded in 1968, embodies a strong focus on community using their ‘Building Bridges through Basketball’ programming. Outside of their commitment to revamping and building new community courts, the Hawks also offer Jr. Hawks Camps and Clinics, an academy for Coaches Education, and over 4,000 hours of community service. As written in the Building Bridges Brochure, the Hawks believe that “every child deserves the right to safe places to play and in the power of sports and the social, emotional, and physical benefits they offer kids.”

SnapSports, a family owned company, has a similar philosophy to that of the Hawks. Their ‘Never Stop Playing’ marketing campaign is meant to encourage families of all ages to get out and play! SnapSports manufactures and distributes both indoor and outdoor game courts from their 100,000 square foot ISO certified facility in Salt Lake City, Utah. 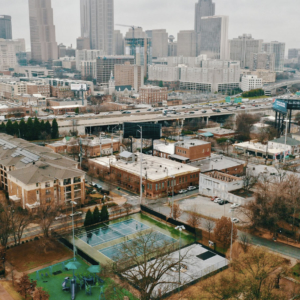 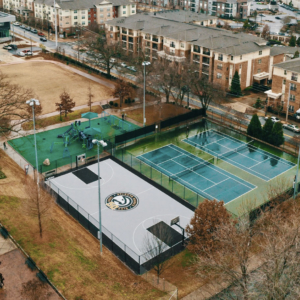 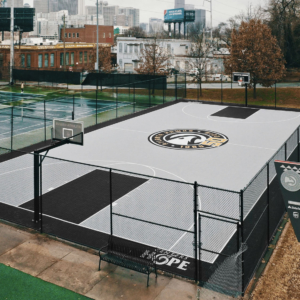