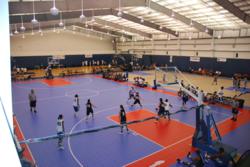 SnapSports® will provide 20 championship basketball courts for the Pacific AAU Girls District Championships, at the Reno-Sparks Convention Center April 30- May 1, 2011.

SnapSports® Athletic Surfacing has been chosen as the preferred flooring of the Oscar Jimenez Pacific AAU Girls District Championships, being held at the Reno-Sparks Convention Center in Reno, Nevada, April 30 – May 1, 2011. SnapSports® will be providing 20 high-performance Basketball courts, ideal for tournament play, for the duration of the games.

For the 10th consecutive year, Jam On It – All Under One Roof Basketball Tournaments, now entering its 20th year of tournament hosting and recognized as one of the premier tournament event operators in the country, will host the Pacific AAU Girls Basketball District Championship, which serves as the AAU National Qualifier for the Pacific District. The Pacific District has one of the largest AAU memberships, and this qualifier, serves as not only a District Qualifier, but also as an opportunity for coaches and players to come together and celebrate girls basketball. All of the games played during this two-day tournament, will be played on SnapSports® multiple patented courts, the preferred flooring of, Jam On It – All Under One Roof Basketball Tournaments.

“The Flooring is awesome, (the players) love it, the way you install it, the way you clean it, the way we set-it up, it’s second to none,” said Matt Williams, tournament director of Jam On It –All Under One Roof Basketball Tournaments.

“We are excited for the opportunity to continue our long standing relationship with this outstanding organization, and provide the type of high-performing sports floor these young athletes need to perform at the top of their game,” said Jorgen Moller, CEO of SnapSports®, Inc.

The 2011 Pacific AAU Girls District Championships are also adding special events to this year’s tournament. There will be games for coaches to participate in, free throws and three point shoot outs for the players and parents as well.