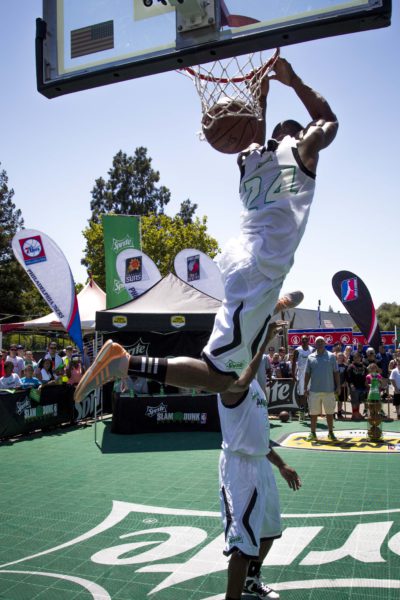 It’s the end of summer and that means light jackets, back to school, and the end of the 2014 NBA Nation Tour, presented by Sprint. The NBA Nation Tour is the largest NBA mobile experience. This year the tour had a record attendance of over 3 million fans visiting 8 cities with their final destination Detroit, MI for the Arts, Beats, and Eats event. This labor Day finale will feature pistons legends Rich Mahorn and Earl Cureton, the Detroit Pistons Dancers and the high-flying dunk squad ‘Flight Crew’. These and other fan-friendly activities will take place on SnapSports® Outdoor Bounceback® ShowTower® surfacing, the official court of the NBA Nation Tour.

“SnapSports and the NBA Nation Tour have had a fantastic summer, we could not be mored pleased with each of the tour events,” said Jorgen Moller, SnapSports CEO. “Having our patented outdoor courts used by the NBA professionals and over three million NBA fans illustrates exactly what SnapSports is about: bringing top rated, safe surfaces to any backyard or facility with families and athletes at any level.”

SnapSports first partnered with the NBA during the 2014 All-Star Weekend in New Orleans, providing over 100,000 square feet of athletic surfacing for the NBA Jam Session. This partnership continued when SnapSports was selected as the Offical Court of the 2014 NBA Nation Tour. It was important to the NBA that they choose a surface that would guarantee safe play for millions of fans while still playing like a professional floor. SnapSports is proud to be recognized as the only surface in the industry with shock absorption system built right into the understructure. Both Snapsports and the NBA are ecstatic with the outcome of the 2014 Summer Tour.

“The NBA was proud to partner with SnapSports for the 2014 NBA Nation Tour,” said Patrick Sullivan, NBA Vice President of Events. “The quality, performance, and guaranteed safety of SnapSports surfacing played a big part in the success of the NBA’s largest mobile experience.”