SnapSports® Athletic Surfaces are the Official Basketball Courts for the AAU “All Under One Roof” Big Mountain Jam Tournament in Salt Lake City, UT 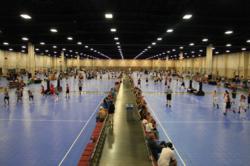 SnapSports will deliver over 110,000ft² of premium Basketball Surfacing for the “All Under One Roof” Big Mountain Jam Tournament to be held June 27-29, 2013, in Salt Lake City, UT at the South Towne Expo Center.

For the first time, Big Mountain Jam will be run by the AAU “Jam On It/All Under One Roof” organization, in conjunction with SnapSports. All athletes will compete on 23 SnapSports multi-patented basketball courts, featuring the revolutionary ShockTower® Shock Absorption Technology that improves performance and eases impact to players’ joints and limbs during aggressive play.

Big Mountain Jam, an annual AAU sanctioned tournament, now partnered with SnapSports and presented by the ‘Jam On It/All Under One Roof’ organization, has experienced exponential growth over several years and is now one of the leading AAU Basketball Tournaments in the country. With over 400 teams and an expected attendance of 15,000 people, this event is experiencing explosive growth and is expected to continue to rise in years to come.

“Over the past several years, SnapSports has had the opportunity to participate in this event, as the Official Sports Surfacing. We are very excited to increase our involvement and co-host this year’s tournament with the ‘Jam On It’ Organization, one of the premier event organizers in the country. We hope to continue our involvement and build this growing event in the years to come.”
~ Jorgen Moller – CEO, SnapSports Inc.

SnapSports is the world’s leading manufacturer and provider of backyard courts and indoor multi-sport surfaces. SnapSports multi-patented products are engineered with safety and performance in mind, to deliver superior traction, consistent ball response, and unmatched shock absorption. SnapSports patented ShockTower® Shock Absorption Technology eases the impact on players’ joints, allowing them to play longer today and for years to come. SnapSports floors are engineered to withstand competition at the highest levels, making them the top choice of coaches, athletes and facility directors worldwide.

“Jam On It and the ‘Big Mountain Jam’ are excited to return to Salt Lake City. Big Mountain Jam is growing every year and SnapSports is a big contributor of our success. The teams love these courts and the way they play; no other modular sport flooring company can compare to SnapSports. We are looking forward to an exciting, full week of basketball in Salt Lake City.”
~ Matt Williams – CEO, Jam On It/All Under One Roof