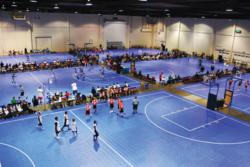 SnapSports® Athletic Surfacing will provide the official flooring for the Jam On It 2012 Reno AAU Spring Jam, to be held March 31 – April 1, 2012 at the Grand Sierra Hotel & Resort in Reno, NV. All tournament and championship games will be played on SnapSports multi-patented, high-performance athletic surfacing.

The Annual Reno AAU Spring Jam, hosted by the Jam On It Basketball Academy, now entering its 21st year of tournament hosting and recognized as one of the premier tournament event operators in the country, and the Pacific AAU, bring together young athletes of various skill level and age, together to compete and celebrate their passion for basketball. All of the games played during this two-day tournament, will be played on SnapSports® multi-patented Athletic Surfacing, the preferred flooring of, Jam On It – All Under One Roof Basketball Tournaments.

“The Flooring is awesome, (the players) love it, the way you install it, the way you clean it, the way we set-it up, it’s second to none and we tried all of the others” – Matt Williams, Tournament Director, Jam On It –All Under One Roof Basketball Tournaments

“We are excited for the opportunity to continue our long-standing relationship with this outstanding organization, and provide the type of high-performing sports floor these young athletes need to perform at the top of their game” – Jorgen Moller, SnapSports, Inc.