SnapSports® Teams up with the largest AAU Basketball Tournament in US 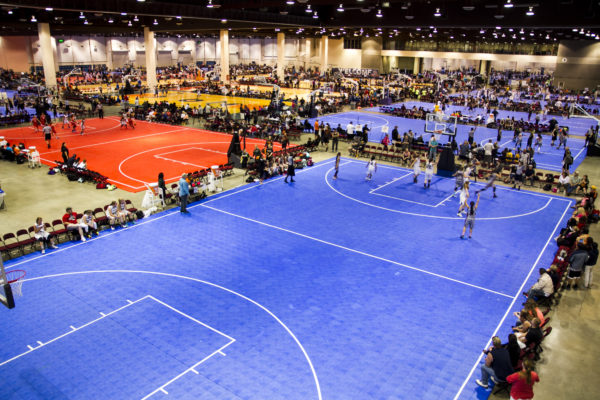 SnapSports® returns as the Official Championship and Tournament sports surface for the AAU Jam On It Memorial Day Tournament In Reno, May 23-25

Athletes and spectators will flock to sunny Reno, Nevada this Memorial Day Weekend for the 14th Annual Reno Memorial Day Tournament which will take place at the Reno Convention Center May 23rd-25th.  The ‘Jam On It’ Reno Memorial Day Tournament will host over 1000 teams, tightly holding its reputation as the World’s largest AAU basketball Tournament.  Throughout the three day tournament, athletes, coaches, and AAU representative look forward to, again, using SnapSports tournament basketball courts. Having been chosen for its unmatched durability, ease of installation, high performance, and safe play, SnapSports  is proud to continue its longstanding partnership with ‘Jam On It’ as the official sports flooring.

“Everyone at SnapSports is proud that the world’s largest basketball tournament chose SnapSports Athletic Surfaces as the ‘Official Basketball Court’ over all others, a testament to the fact that when it comes to durability, performance and player safety, we are unmatched.”  Jorgen Moller Jr, CEO SnapSports

During the Tournament both qualifying and championship play will take place on over 85 courts featuring the multi-patented SnapSports  BounceBack® ShockTower® surfacing.  SnapSports BounceBack® sports flooring with ShockTower® technology is the ONLY modular sports surfacing featuring actual shock absorbers built into the flooring structure – a multi-patented “resilient shock” technology that was designed with superior performance and player safety in mind. With over 16 individual shocks per square foot, ShockTower® is the OneCourt® that stands above all others.

“Over the years, we’ve used nearly every indoor modular surface, but SnapSports products are the best in the industry. These young athletes can play upward of a dozen times during an event, but with the incredible structural support of ShockTower, the players are never fatigued from floor impact.” – Matt Williams, AAU, Second Vice President, ‘Jam On It’ President

SnapSports manufactures 24/7 in their 150,000 square foot ISO 9001:2008 Quality certified facility in Salt Lake City, Utah. SnapSports is the Official Court of AAU Basketball Jam On it, AAU All Under one Roof,  The Big South, The United States Futsal Federation, NBA Jam Session, NBA Nation, 2015 NBA House, and USA Team Handball. SnapSports is an official FIBA Technical Partner and has been a proud partner of The Special Olympics, The National Veterans Wheelchair Games, The Volleyball Festival, Gus Macker 3X3, The Vanilla Ice Project, World Police & Fire Games and The National Collegiate Roller Hockey Championship to name a few. SnapSports surfaces are made in the USA and played on around the world.