“As a big guy and former athlete I needed an athletic surface that would be forgiving on these old knees. Their revolutionary SnapSports ShockTower athletic surface has built in shock absorbency and it was a no brainer for me.”

Ben Grubbs talks about his new backyard court and why he chose SnapSports.

Ludacris rolls out his new courts

“As I was calling around looking for bids on an athletic surface for my gym, I luckily got connected with SnapSports of Montana. They went above and beyond to help me find the best product for my gym. Josh sent me info and explained the many options, that made it much easier for me to go with SnapSports.... He drove 3 hours on short notice to meet with me here in Missoula, Mt..... I know my expansion would have not gone nearly as smooth if I didn't have Josh and SnapSports helping me out. I'm more then satisfied with the service that was provided to me by Full Court Athletics and the team of SnapSports.”

The benefits of SnapSports Athletic Surfaces

You’ll never worry where your family is when you have a SnapSports® outdoor Multi-Game home basketball court. Meet some happy parents telling others about their SnapSports multi-sport backyard game courts.

AAU had a “court vision” for their championship tournament and SnapSports indoor basketball courts and athletic surfaces arrives with a slam dunk! Hear why SnapSports is the choice of the AAU over every other modular sports flooring.

Ronnie Price of the NBA talks about his new SnapSports Backyard Basketball Court. Design your new outdoor multi-court and your whole family can enjoy all their favorite sports.

A proud new SnapSports family holds a “Knock Out” competition in their backyard to raise funds for charity.

Gus Macker (America’s original 3-on-3 Basketball Tournament) talks about the use of SnapSports athletic surfacing and the importance of it in his famous 3-on-3 tournaments.

“I want to thank you and SnapSports for the wonderful blessing you provided our family. I appreciate your company’s willingness to work with Make-A-Wish to truly make my 13 year old son Andrew’s wish come true. He loves the court and looks forward to when he can play on it on a more regular basis. He continues to get his strength back more and more each day. Thank you again for all of your help.” 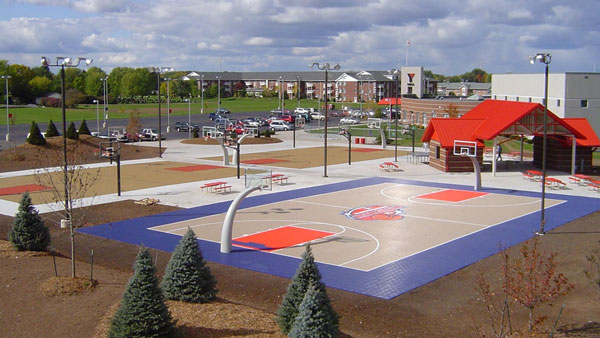 “SnapSports offered the best in quality, durability, aesthetics and affordability…”

“The defending NBA Northwest Division Champion Seattle Sonics and 2004 WNBA Champion Seattle Storm are proud to announce a partnership with SnapSports, provider of backyard game courts, athletic sports floors, and gym floors. Our organization always strives to associate itself with the best of brands, which is why we have partnered with SnapSports. If you are considering an investment in a game court for your family, keep in mind that only one company carries the Sonics and Storm’s full endorsement”

“After carefully looking at all the other backyard court companies, we decided to go with SnapSports, and we could not be any happier with our decision. The level of service from when we placed our order to the finished installation was phenomenal… We just love our Court. Our kids and all of their friends are out back playing every day for hours… What a great investment in our family.”

“As a builder of high end homes, I have seen virtually every level of outdoor game court available and the obvious choice for my home was SnapSports…It looks great and the quality & value of the product is unmatched. My son is now the most popular kid in the neighborhood.”

“This court is so great! Our only regret is that we did not purchase our SnapSports sooner.”

“Our family cannot put into words how excited we are to be able to have a SnapSports outdoor game court in our backyard! …it was a complete pleasure to deal with your company. Ordering from Utah for a delivery to Canada… the whole process from beginning to end was completed in an efficient, effortless and timely manner. The quality of your product is undeniable and our backyard is now the envy and the focus of every child on the block. We can truly say that we are so happy to have used SnapSports for this addition to our property that keeps our family, friends and neighbors safe, active and able to enjoy outdoor sports on the comfort of our own backyard.”

“With my wife being a Physical Education teacher, we have been looking for a high quality backyard system for our family to enjoy. After seeing the DuraHoop™ and the SnapSports Sports surface, we decided it was the best outdoor sports system available… Our family has been playing on the court everyday ever since.”

“As a former college basketball player, I have always wanted a real basketball court at my home. After playing on the SnapSports BounceBack surface I was amazed at how good the play & bounce of the ball on the surface was. Another great feature was how much better my joints and back feel after a hard game with my friends… I found it really comparable to a professional indoor basketball surface. My kids love it too, playing volleyball, soccer and basketball virtually everyday.”

“My family is enjoying the new SnapSports basketball hoop immensely. We are the hit of the neighborhood with kids of all ages. We researched many products and consulted with several sales representatives. None were as knowledgeable and willing to work with us, as you were. You made the selection process painless and we felt comfortable with our decision. Thank you again for providing a solution we will all enjoy for years to come.”

“I got home late last night and saw the hoop and was amazed. 7 am today my boys woke me up and said ‘dad, let’s go out and shoot hoops.’ (They’re 6). We had a ball. Thanks again, the hoop is awesome and looks great too. My neighbors will be going crazy.”

“As a professional football player for the Pittsburgh Steelers and a father of three children, we are looking forward to many years of family enjoyment and fitness on our SnapSports in our new home… Since playing on our court, I have been impressed with the quality of the components (DuraHoop, SnapBack, Lights, etc) and especially the BounceBack® cushioned sports surface… We are very pleased with our purchase and will recommend SnapSports to all of our friends.”

“Please know how pleased we are with SnapSports. We are so glad we went with you rather than that other company. SnapSports is a better product at a better price with service that can’t be matched. You all did a wonderful job and we truly appreciate your bringing our yard alive with SnapSports.”